Are Shock Collars Safe for Cats?

Shock collars and electric collars cause levels of suffering and harm that are not acceptable. The collars can deliver a maximum of 6,000 volts of electricity and other types of collars may spray chemicals in a bid to control the behaviour of the cat. The shock may be delivered for up to 11 seconds at a time and all can have negative effects on the well-being of the cat or dog.

Animal campaigners supported the ban, although the RSPCA would like to see it extended to cruel electric fences used for pet containment. A spokeswoman for the RSPCA said that these kinds of devices are not necessary as there are viable and human alternatives for containing cats and dogs. Turning to positive training and pain free methods are safe and effective.

Shock collars are cruel and unnecessary. Cats can be protected from road accidents and other incidents with the use of cat friendly cat fencing and alternative solutions. ProtectaPet cat fences, catios and cat enclosures are designed not to need electricity to work. Cats are contained in a safe environment using the patented designed, preventing them from escaping the area and getting into harms way.

Cat shock collars are never acceptable. The Dogs Trust and animal campaigners are delighted about the ban on such devices in England. However, the hard work doesn’t stop there. More work is needed to extend the ban to electric fences used for cats and dog containment. 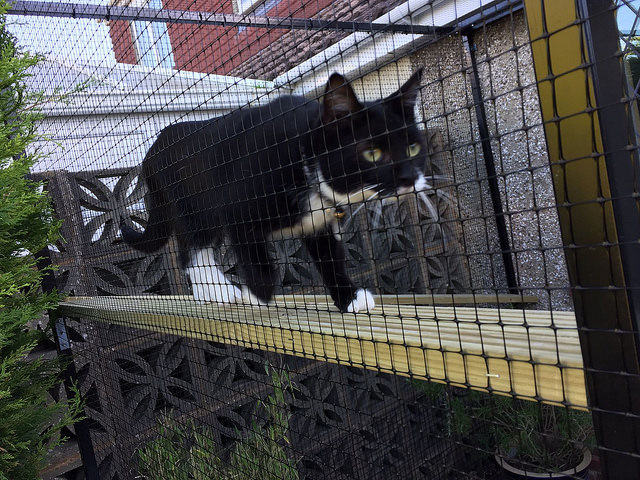 ​How to Train your Cat to Walk on a Leash

There has been an increase of people keeping their cats indoors in recent years. With many cats getting hit by cars, going missing and catching parasites, owners are scared of their cats being hurt. While cats can still live a full life and have fun indoors, the majority of cats love adventuring past the front door and exploring what else [...]