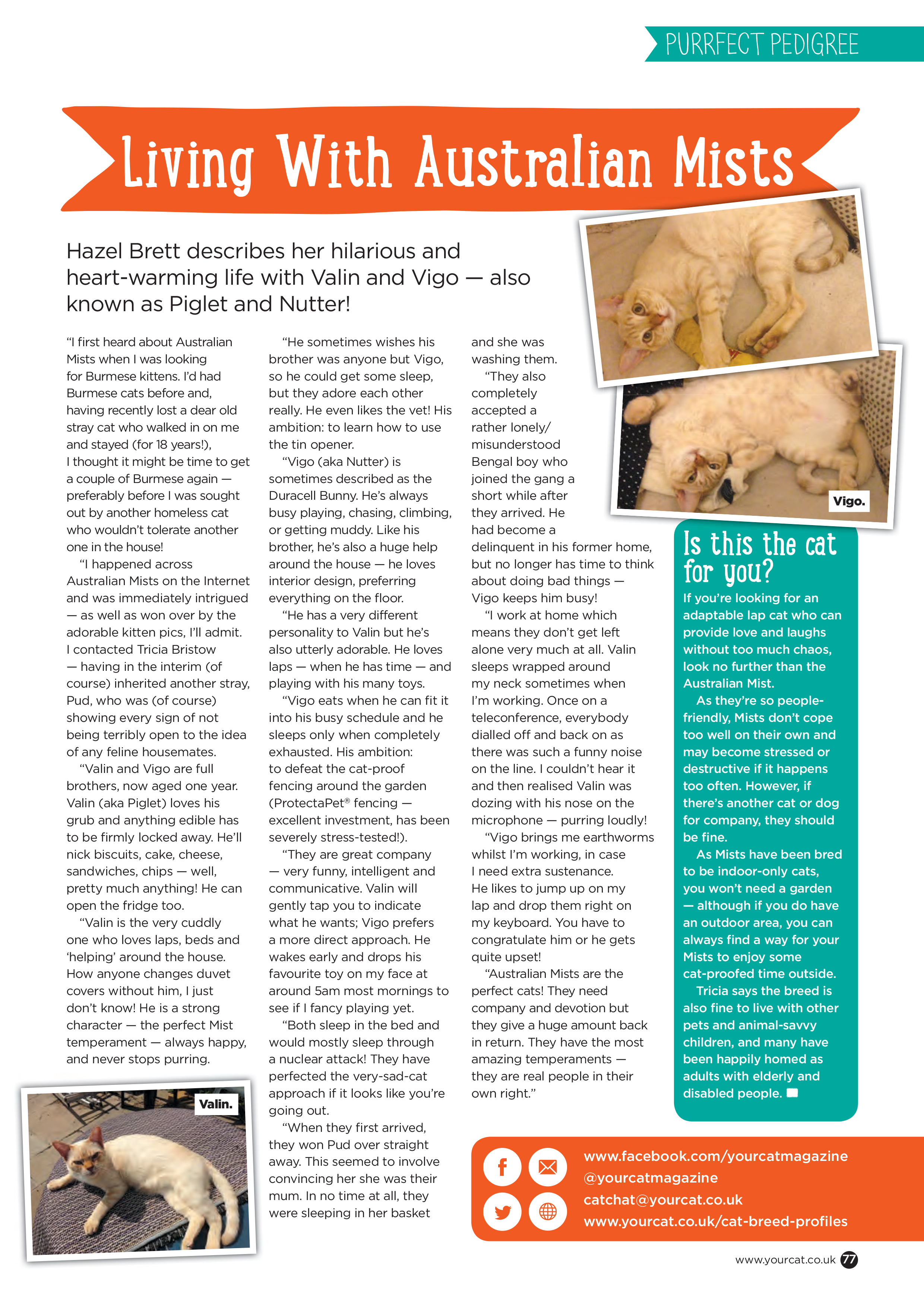 Hazel Brett describes her hilarious and heart-warming life with Valin and Vigo – also known as Piglat and Nutter! “ I first heard about Australian Mists when I was looking for Burmese kittens. I’d had Burmese cats before and, having recently lost a dear old stray cat who walked in on me and stayed (for 18 years), I thought it might be time to get a couple of Burmese again – preferably before I was sought out by another homeless cat who wouldn’t tolerate another one in the house!

I happened across Australian Mists on the Internet and was immediately intrigued – as well as won over by the adorable kitten pics. I’ll admit, I contacted Tricia Bristow – having in the interim (of course) inherited another stray. Pud, who was (of course) showing every sign of not being terrily open to the idea of any feline housemates.

Valin and Vigo are full brothers, now aged one year. Valin (aka Piglet) loves his grub and anything edible has to be firmly locked away. He’ll nick biscuits, cake, cheese, sandwiches, chips – well, pretty much anything! He can open the fridge too.

Valin is very cuddly one who loves laps, beds and ‘helping’ around the house. How anyone changes duvet covers without him, I just don’t know! He is a strong character – the perfect Mist temperament – always happy, and never stops purring.

He sometimes wishes his brother was anyone but Vigo so he could get some sleep, byt they adore each other really. He even likes the vet! His ambition: to learn how to use the tin opener.

Vigo (aka Nutter) is sometimes described as the Duracell Bunny. He’s always busy playing, chasing, climbing, or getting muddy. Like his brother, he’s also a huge help around the house – he loves interior design, preferring everything on the floor.

He has a very different personality to Valin but he’s utterly adorable. He loves laps – when he has time – and playing with his many toys.

Vigo eats when he can fit it into his busy schedule and he sleeps only when completely exhausted. His ambition to defeat the cat-proof fencing around the garden (ProtectaPet fencing – excellent investment, has been severely stress-tested!)

They are great company – very funny, intelligent and communicative. Valin will gently tap you to indicate what he wants. Vigo prefers a more direct approach. He wakes early and drops his favourite toy on my face at around 5am most mornings to see if I fancy playing yet.

Both sleep in the bed and would mostly sleep through a nuclear attack! They have perfected the very-sad-cat approach if it looks like you’re going out.

When they first arrived, they won Pud over straight away. This seemed to involve convincing her she was their mum. In no time at all, they were sleeping in her basket and she was washing them.

They also completely accepted a rather lonely/misunderstood Bengal boy who joined their gang a short while after they arrived. He had become a delinquent in his former home, but no longer has time to think about doing bad things – Vigo keeps him busy!

I work at home which means they don’t get left alone very much at all. Valin sleeps wrapped around my neck sometimes when I’m working. Once on a teleconference, everybody dialled off and back on as there was such a funny noise on the line. I couldn’t hear it and then realised Valin was dozing with his nose on the microphone – purring loudly!

Vigo brings me earthworms whilst I’m working in case I need extra sustenance. He likes to jump upo in my lap and drop them right on my keyboard. You have to congratulate him or het gets quite upset.

Australain Mists are the perfect cats! They need company and devotion but they give a huge amount back in return. They have the most amazing temperaments – they are real people in their own right.